To help commemorate the 75th anniversary of “VP Day”, the end of the Second World War, the Shrine of Remembrance Melbourne invited Megan Spencer (maker of award-winning podcast From A Whisper To A Bang!) to a present trio of video interviews for the project World War II At Home: Response, Reflection & Rejuvenation.

Funded by the Victorian Government, the project is a partnership between the Shrine, the National Trust, Open House Melbourne and the Centre for Architecture Victoria. 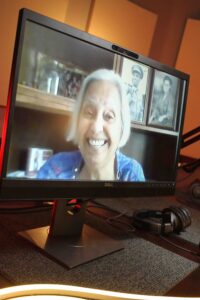 Aunty Glenda is eldest living daughter of the late Captain Reginald Saunders (Gunditjmara), Army, one of Australia’s most famous soldiers and the first-known Aboriginal soldier to be commissioned as an officer.

Born in Victoria, each speaker reflects upon their personal experiences before, during and after the war.

It is a window into living history and a chance to walk in the shoes of three people with different points of view on how the war affected the country – and the world – at that time.

“It was just such a privilege to be able to listen to people who have lived through – and have insight into – such a significant moment: the end of World War II ,” said Megan in an interview about the project on Radio Adelaide’s Service Voices.

The videos will stay online for 12 months on the World War II At Home website. Extended audio versions of each will also be hosted on the Shrine’s website, as podcasts.

Watch the 3 videos at these links:

With thanks to Mac Ford, Jim Paizis, Aunty Glenda Humes, their families, the Shrine of Remembrance and Podbooth. In remembrance of all those affected by war.

A freshly enlisted Mac Ford, pictured on the ‘WWII At Home’ website.